The Nippon Yusen Kaisha’s SS Suwa Maru was on its maiden voyage from Yokohama to London, when it took on board at Shanghai the 110-strong Shanghai British Contingent. Launched in Nagasaki on 29 March, it was one of three 12 000-tonne steamers built specifically for the Japan–Europe service. Over 500 feet long, it could take 14,000 tonnes of cargo, 122 first-class passengers, sixty in second, and almost 180 in steerage. It had a ‘practically unsinkable’ design, the company boasted, and for modern comfort, plenty of ventilation and hundreds of fans. There was a barbershop, a laundry, and even a darkroom. The Britons bunked in the aft hold, which was specially converted for them — no fans down there. 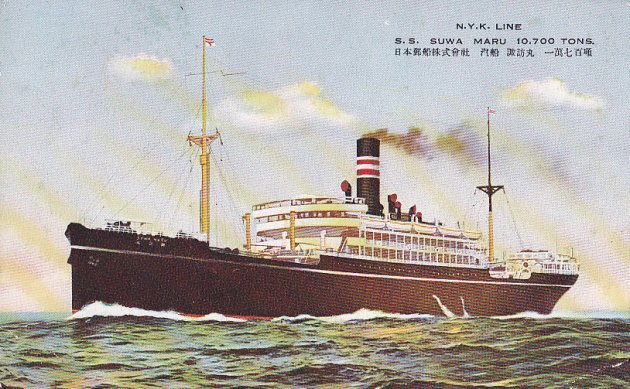 The ship was requisitioned by the Japanese military during the Pacific War, and in late March 1943 was torpedoed by a US submarine off Wake Island. It was grounded by its captain on the island to prevent it sinking, and destroyed by further attacks, although wreckage remained on shore for decades thereafter. Its bell and compass are now in the NYK Museum in Yokohama, as this panel from the (Japanese-language) NYK history website shows. Image 2 shows the wreck of the beached ship.