2017 Out of China: How the Chinese ended the era of Western domination

Now out in Penguin paperback, and published in North America by Harvard University Press.

The blurb: ‘Nationalism matters in China, and what matters in China matters to everyone. China’s new nationalism, Robert Bickers shows, is rooted not in its present power but in shameful memories of its former weaknesses. Invaded, humiliated, and looted in the nineteenth and twentieth centuries by foreign powers, China looks out at the twenty-first century through the lens of the past. History matters deeply to Beijing’s current rulers, and Out of China explains why.

Bickers tracks the long, often agonizing process by which the Chinese regained control of their own country. He describes the corrupt, lurid modernity of prewar Shanghai, the often tiny patches of extraterritorial land controlled by foreign powers, the entrepôts of Hong Kong and Macao, and the myriad means—through armed threats, technology, and legal chicanery—by which China was kept subservient until, gradually, it emerged from Western control. This plural and partial subjugation of China is a story that involves not only European powers and Japan but also the United States.

This complex history must be grasped not to atone for the sins of the past but to recognize China’s internationalized landscapes with all their contradictions, violence, cosmopolitanism, and ambitions. The story of the foreign presence in China in the nineteenth and twentieth centuries is too important to be left in the hands of the Chinese party-state and its approved script. Out of China is essential reading for anyone wishing to understand what shapes China’s view of the world in the twenty-first century.”

2014 Getting stuck in for Shanghai, or, Putting the Kibosh on the Kaiser from the Bund. The British in China and the Great War.

Designed as a short e-book, but available in Penguin paperback.

The blurb: “After 1914, between tiffin and a day at the race track, the British in Shanghai enjoyed a life far removed from the horrors of the Great War. Shanghai’s status as a treaty port – with its foreign concessions home to expatriates from every corner of the globe – made it the most cosmopolitan city in Asia. The city’s inhabitants on either side of the conflict continued to mix socially to mix socially after the outbreak of war, the bond amongst foreign nationals being almost as strong as that between countrymen. But as news of the slaughter spread of the Far East, and in particular the sinking of the Lusitania, their ambivalence turned to antipathy.”

For more on this account of the experiences of the British in Shanghai and the First World War see this page.

The blurb: “In the early 19th century China remained almost untouched by Britain and other European powers – ferocious laws forbade all trade with the West outside one tiny area of Canton. Anyone teaching a European to speak Chinese was executed. But as new technology began to unbalance the relationship, foreigners gathered like wolves around the weakening Qing Empire. Would the Chinese suffer the fate of much of the rest of the world, carved into pieces by the Europeans? Or could they adapt rapidly enough to maintain their independence? Humiliated by military disaster, racked by rebellions that cost millions of lives and ultimately invaded during the Boxer Rebellion by thousands of foreign soldiers, it looked as though the colonial Scramble for Africa was about to be followed by the Scramble for China.

This extraordinary new book tells this epic story both from the European (mainly British) point of view and the Chinese. The degradation of China in this period is crucially important to understanding China today, whose government and people are steeped in stories of this terrible time and never wish to appear weak again. The Scramble for China is both highly original and brilliantly written – it reimagines these encounters between two equally arrogant and scornful civilizations, whether from the point of view of a Chinese governor or a British soldier. It is an epic of squalor, romance, brutality and exoticism, and it changed the world.

“At every airport bookshop, the business traveller is offered shelves of volumes that purport to tell us how an emerging, powerful China will deal with the world, and how the rest of us should make the most of the commercial opportunities opened up by its rise. Those who wish to understand these issues more closely might be better advised to read this fair and fascinating account.” Chris Patten Financial Times.

“Meticulously researched, this is an authoritative study of a “dark, complex phase in modern China’s history”. The Guardian.

“Powerful, astute and readable … meticulously researched in contemporary English-language records and journals, and written with flair and feeling, its rhetoric eschews rant and is never misplaced” John Keay, Literary Review

2003 Empire Made Me: An Englishman Adrift in Shanghai

Published in the UK by Penguin books, 2004 ISBN 0141011955, and in north America by Columbia University Press. Now available in Kindle.

The blurb: ‘Shanghai in the wake of the First World War was one of the world’s most dynamic, brutal and exciting cities – a swarming metropolis of nightclubs, opium-dens, gambling, sex and murder. Threatened from within by gangsters, communists and nationalists, and from without by Chinese warlords and the Japanese military, the hold of the British dominated administration seemed increasing fragile.

Robert Bickers’s account of this corrupt and mesmerizing city is illuminated by the rediscovered letters and photo-albums of a forgotten Englishman – a tough, resourceful policeman who stepped into the maelstrom of post-war Shanghai. Told through the moving story of one man’s life and death while working for a governing class he could never belong to, Empire Made Me provides an intriguing glimpse into how the British Empire really worked.’

Some reviews: “Informative… energetically written. Making his way warily between the anti-imperialists and the nostalgists of empire, placing a ‘marginal’ man in his full context, Bickers does lift a corner of the curtain on a nearly lost world, a world as ordinary then as it may seem extraordinary to us.” — John Spurling The Guardian. Full review here.

“Empire Made Me is a fascinating and intimate portrait of Shanghai at its apex’. Asian Review of Books

” A work of dedicated and original scholarship… What emerges is the portrait of a singular and heroic man.” — John Carey Sunday Times, London

“One of the most intriguing true-life books of the year. — David Wilson South China Morning Post 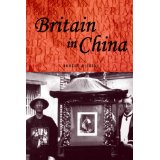 Blurb: Robert Bickers paints a detailed portrait of the traders, missionaries, businessmen, diplomats and settlers who constituted “Britain-in-China.” Bickers argues that the British presence in China was dominated by urban settlers whose primary allegiance lay not with any grand imperial design but with their own communities and precarious livelihoods. This brought them into growing conflict with the Chinese population and the British imperial government. Bickers goes on to examine how the British state and its allies brought an end to the reign of freelance, settler imperialism on the China coast. At the same time, other British sectors, missionary and business, renegotiated their own relationship with their Chinese markets and the Chinese state and distanced themselves from the settler British.