My books have travelled with me over the years, from secondhand shops the world over, through London and here to Bristol. But many of them had journeyed far before then, and had passed through other libraries. An occasional series of posts will explore the journeys of some of these.

In 1991 I helped mediate the donation to the Archives at the School of Oriental and African Studies of the Scott family papers. The Revd Charles Perry Scott (1872-1927) was a founder of the Church of England North China Mission, based in Shandong province. He was the first Bishop of Shantung. The material included publications of the mainly Shandong-based mission, correspondence of the Scott family and others in the society, and also letters and diaries of Maurice Woodford Scott (1902-83) from his years working in China for Butterfield & Swire. Scott had been born in Peking, and had been sent to school in England before studying at Oxford university, and joining Swires as one of a new breed of university graduates the firm started to recruit in the early 1930s.

Amongst the items not needed by SOAS library was this 1933 edition of a pocket dictionary, compiled by Revd Dr. Chauncey Goodrich (1836-1925) of the American Congregational Mission (whose grandaughter died just last year). It belonged to Maurice Woodforde Scott, whose initials are on the inside front cover. Scott would have needed a coat pocket to hold it in, but nonetheless the book has evidently been carried around by him.

It has also been written in. There is little space in the book itself: its printed pages are crammed with entries and columns of characters, but on the inside and front covers and one blank page, we can catch glimpses of Scotts life and travels.

Here is the Revd R.N. Bland’s address: ‘Sheng Kung Hui, Hengchow, Hunan’. An Anglican missionary, Bland was later curate at Camborne in Cornwall. Here is Mr Li’s address at Guangxi University in Guilin. Here is the name of a lacquer manufacturer in Fuzhou. They were perhaps met on trains, or on ships, as Scott travelled around. Someone has written in the name of the Tang dynasty painter Wu Daozi, someone else the note ‘江西省的会馆’ — Jiangxi guildhall — and another wrote a temple name, Fayuan si (as likely as not the temple of that name in Peking). Yet another hand has written 六郎斬子, the title of an opera, with the romanisation next to each character, including the tone mark. 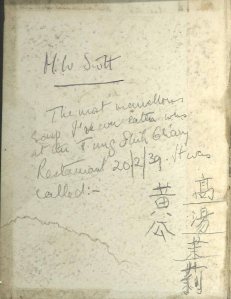 Most marvellous of all is Scott’s own attempt to write out the characters from a menu. ‘The most marvellous soup I’ve ever eaten’, his note reads, ‘was at the Tung Shih Ch’ang Restaurant 20/2/1939. It was called:- 高湯茉莉黄瓜’.

This was Gaotang moli huanggua: a jasmine flavoured cucumber soup, and Scott was probably enjoying a new year’s feast, for this was the second day of the new Chinese year of the rabbit. Where might the restaurant be? Scott served in a variety of postings for Swires, before he left, and later himself took holy orders and served as a clergyman in England. I suspect it was a restaurant in Peking.

Scott’s shaky calligraphy was improved upon perhaps by a Chinese companion or host at the restaurant — for I think we can assume that the note was made at the table, with the taste of the dish still upon his tongue. On the opposite page the same characters are written out again by a fluent hand. The writer, evidently dissatisfied with the final word, 瓜, wrote it out yet again, in firm and very clear strokes.

There too, on the same page, are a couple of sketches of Chinese faces, presumably also from Scott’s pencil.

So in these few pages is caught a wonderful array of pieces of information that Scott, lacking a notebook, needed to copy down. On the hoof, in a restaurant, on board, waiting perhaps with time on his hands and but a pencil and dictionary to pass the time, Scott jotted things in it, or got others too. It serves as a record of encounters with food and language, people and culture. He notes where to buy lacquer, and perhaps which temple he should visit. The dictionary cost him $3.50. These are fleeting notes. Perhaps he wrote to Revd Bland and Mr Li; perhaps he visited the Fayuan si or the Fuzhou lacquer dealer, most likely not. Most likely he never again tasted Gaotang moli huanggua, ‘the most marvellous soup’, but perhaps in later life he turned the page and memory took him back to the Tung Shih Ch’ang restaurant and the delightful dish that he encountered as part of the new year celebrations on Monday February 20 1939.