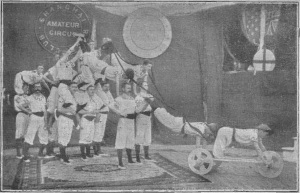 Here are Shanghailanders at play, in the third of the Shanghai Race Club Amateur Circus events, in 1901, a year after the Boxer War, while foreign troops still occupied parts of north China, and were stationed at Shanghai. The first two circuses were held in August 1894 and 1895, a hot and steamy time of year for the foreign community to be masquerading as Sophie Skylark, Tottie Chuckerout and Professor Nankin Roady (to select a few from the programmes). The leading light was British merchant Frank Maitland (‘Frankini’), sportsman, sometime Master of the Shanghai Paper Hunt Club, Race Club Steward, founder of the Shanghai Society for the Prevention of Cruely to Animals, proprietor of the newspaper Sport and Gossip, and then of the Shanghai Times.

It was, as far as I can see, an entirely masculine enterprise, originating in a ‘circusette’ put on one sultry Wednesday evening in June 1893 in the Race Club Grand Stand. A lavishly illustrated souvenir of the 1901 performances surfaces at auctions, and sells quite handsomely. Amongst its photographs is this pearl: Tottie Longsocks — who ‘wins all hearts’. 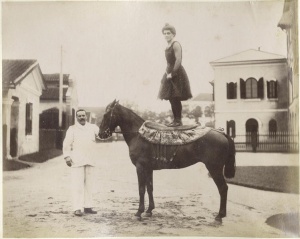