It is not what they built. It is what they knocked down.

Old Shanghai’s remaining pre-1949 buildings get all the attention, and so too, to a lesser extent, the buildings that have been swept away by the rapid pace of urban redevelopment in the city over the last decade and a half. But what about the memorials and monuments that also formerly graced the city? In this and forthcoming posts I will draw from my recently published article on the subject, and look at the the stone and bronze memorials that once stood on the Bund at Shanghai, moving north from the last of them, the Allied War Memorial, that was placed at the intersection of what is now Yenan East Road and the Bund, and on the border between the French Concession and the International Settlement. In many classic shots of the 1930s Bund it is used to frame the picture.

Designed by Henry Fehr, who was responsible also for civic war memorials in Leeds, and in Graaf Reinet in the Eastern Cape, it was unveiled on 16 February 1924, and was the largest and most impressive of the foreign monuments erected on the Bund between 1864 and the Pacific War. Known in Chinese as the ‘European War Victory Memorial’ 欧战胜利纪念碑 or Angel of Peace 和平女神像, it commemorated the over 200 Shanghai foreign residents who were killed whilst serving for the allied armies during 1914-18, whose story I told in my recent book Getting Stuck in for Shanghai. It was unveiled and dedicated at an impressive ceremony attended by large numbers of veterans, servicemen, foreign civic dignitaries, and, as you can  see, Boy Scouts.

The memorial was thereafter the site of 11 November Remembrance Day ceremonies, and others on ANZAC day, for example. In September 1943 the statuary and side panels were removed by the civi authorities, after Japanese pressure. In 1947 their smashed remains were found in a scrapyard, and transferred to the grounds of the British Consulate-General at the northern end of the Bund.

Although there were attempts by the United Services Association, which represented British veterans, to have the monument restored, nothing came of this. The memorial was always a site of anxiety. As we shall see, all of the Shanghai monuments were, but as the largest of them, and because of its emotional place in the civic war memory of local Europeans in particular, the Angel of Peace attracted a great deal of attention. The files abound with complains about ‘desecration’, and about Shanghai city people resting in its shade or, even worse in foreign minds, using the shelter from view its massive size offered to urinate against the back. In a city with few public latrines, this was hardly surprising, but European residents, ever quick to spot political slights, often interpreted such acts as politically motivated. Police protection was demanded, or barriers, and harsh punishment for those caught in the act.

It is worth remembering, of course, that China joined the war on the allied side in late 1917. But this was only just remembered in 1924, and resentfully so: China’s ‘late’ arrival on the Allied side was felt by many local foreign residents to be worse than not having joined the conflict at all. However noises were made in public about the need for an addition being made to the monument to recognise the sacrifice of the many Chinese members of Labour Corps who worked for the allied forces. But as far as I can find out, the monument never came to bear any inscription or plaque commemorating the Chinese dead of the Great War. There were plans sketched out by the city authorities after 1943 to rework it as a Chinese war memorial, but these also came to nothing. However, browsing around online I did find this wonderful re-imagining of the plinth, which dates from 1950. 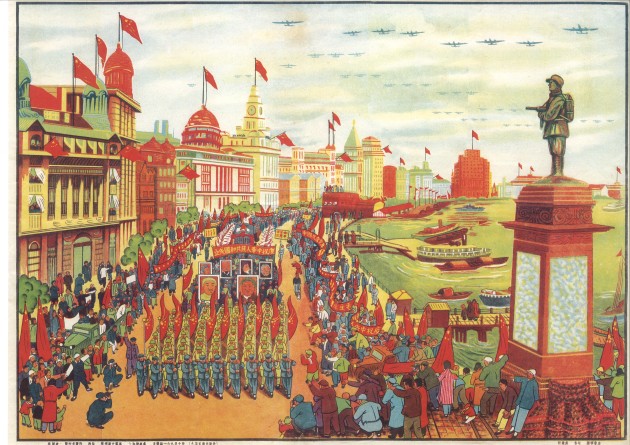 This is a fantasy, of course, but it represents a pragmatic response to the problem of how to deal with the plinth in a view of the Bund. This was needed because while the ‘Angel of Peace’ was removed, the plinth remained. You can glimpse it in many post-war photographs of the Bund, and for some years now I have been trying to work out when it was removed. I assumed it had gone pretty shortly after this poster was published in 1950, but just discovered that it was not removed for another ten years. According to an August 1960 ‘Shanghai Newsletter’ in the South China Morning Post it took a gang of workers two weeks to remove it, as part of a  general remodelling of the entire Bund that had just been completed. It had most recently served to hold up a cinema bill-board.

That provides a nice link to the final image, which came to me courtesy of Jeffrey Wasserstrom, with whom I have in the past written about the history of the Public Garden at the other end of the Bund and the politics of exclusion there. At the Chedun Film Studio’s Shanghai Film Park you can (the website tells me) ‘explore the bustling old Shanghai, take the tram car tour, and roam on the 1930s Nanjing Road, the old streets & alleyways’, and of course, you can have your wedding photographs taken there. Off you go. 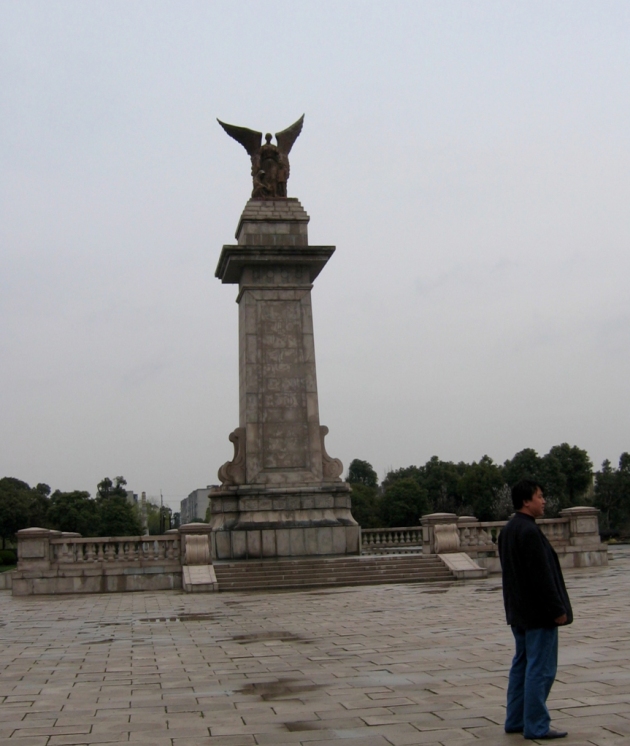