The photograph below was taken at just after 8.30 on the morning of 16 October 1914, and shows just a part of the estimated 7,000 strong crowd that thronged the Bund at Shanghai, and all possible river-side vantage points to wave off 110 British men who were heading out to board the Japanese mail steamer, the SS Suwa Maru. The men were on the first leg of their journey to Britain, and to the various front lines of what we now know as the First World War. This is the story I tell in Getting Stuck in for Shanghai. 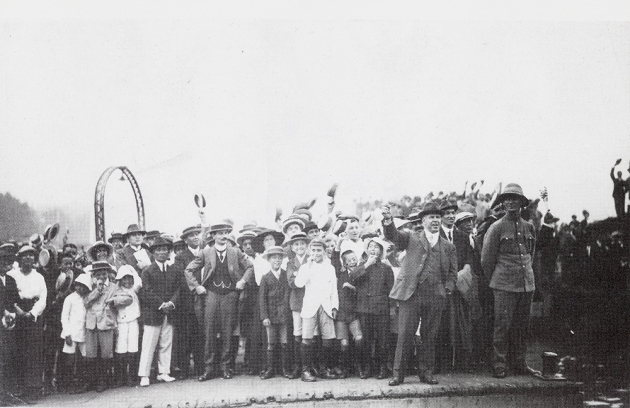 Waving off the Suwa Maru from the Shanghai Bund, 16 October 1914

Some 35 of the men were colleagues of the policeman you can see in the foreground. Others worked for various British trading companies and banks, local department stores, the Shanghai Municipal Council’s Public Works Department, and the Chinese Maritime Customs. Some had been born in China; some had only just arrived to take up posts in Shanghai. One was a policeman from British East Africa, and I have not yet worked out what he was doing in China.

This was possibly just about the largest crowd that had yet ever assembled on the Bund, and it was certainly the noisiest. They hurrahed and sang, competing with the horns and whistles of ships in the harbour, until long after the tender carrying the Shanghai British Contingent had sailed out of sight. A couple of months earlier similar scenes were reported at Shanghai’s North Station, when hundreds of German residents assembled to cheer off 40 military reservists returning to the colours, and entraining for Qingdao, the Germany colony in Shandong. At least two of those had been killed in action before the Suwa Maru reached London in December 1914, others were taken prisoner as Japanese forces captured the city, and were to be placed in POW camps in Japan.

One of the Britons who sailed was 22-year old Albert Rothery, son of a farmer in Patterdale, in the English Lake District. Rothery, apprenticed from school as a plumber, had come to China in 1907 to work for the Shanghai Waterworks Company, a British firm. Earlier this year I helped the Patterdale and Glenridding War Memorial Project find out a little more about Albert, who was listed on the local ‘Roll of Honour’ as a casualty. In fact, as you can see from their webpage about him, Rothery had survived the war, earning a Military Medal and a Military Cross on way, emerging as a Lieutenant in the Tank Corps in 1918. He had first joined the 10th Battalion of the Yorkshire Regiment, along with about 40 of the Suwa Maru volunteers. Lt. Rothery returned to China and the Waterworks, eventually retiring in 1934, and returning to live near his home, settling 30 miles away in Carlisle.

Part of what drives my research is an interest in the British local history of the relationship with China. Far from being the exotic preserve of an ‘imperial’ British elite, you can find links to China like Rothery’s in the local histories of a great many British localities through the people who went out to work there. The China British certainly included the elite businessmen who went to work for Jardine Matheson & Co — the ‘Princely Hong’ that was at the centre of James Clavell’s 1966 blockbuster Tai-Pan (as the ‘Noble House’, ‘Struan’s)– or the Hongkong & Shanghai Bank. But they included too, in far greater numbers, these drapers and policeman, tobacco and oil salesmen, tidewaiters and public health employees who sailed on the SS Suwa Maru in October 1914, and the staff of the Shanghai Waterworks, men like Albert Rothery, the plumber from the Lake District.